The Elusive Highlander by Ju Ephraime
​An Amazon Bestseller! 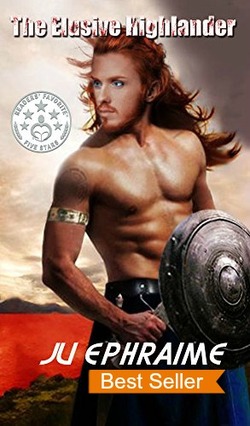 A WARRIOR TOO ELUSIVE TO CAPTURE
He is a Scottish Laird who lives in a world of Druid magic and ancient customs, hand fasted to the sister of his rival clan, MacDougall. Alasdair thought he was doing the right thing trying to bring peace to the region. But he is murdered on the eve of his wedding. Not willing to accept his death, his mother, a Druid priestess, performs a geas to keep him alive. But something went awry because, as the last word of the geas was spoken, Alasdair is trapped in time where he wanders the earth for centuries. The only one who can bring him back home is his betrothed. He has given up on ever finding her until she walks into his office in twentieth century Manhattan.

A WOMAN TOO STRONG WILLED TO TAME
Coira Ainsley is a happy-go-lucky young woman living in twenty-first century Manhattan. Her job as a travel agent takes her all over. She loves the work she does and is excellent at it. That is until she follows her client into his office, and finds herself in the fourteenth century at Inveraray Keep, in the Highlands of Scotland. At first, Coira thinks a prank is being played on her until she sees the giant, wearing nothing but a kilt and a studded leather strap across his massive chest approach her. Not one given to swooning, Coira finds herself welcoming the darkness that come over her as she loses consciousness, without learning that the naked giant is her betrothed from another time... another place. Will she give in and accept what has been pre-destined or will she fight to get back to the life she knows and loves?

"Ephraime's first book in her Highlander series is a fascinating,captivating read. She blends a fast-paced adventurous plot with magic and intrigue to form the perfect backdrop for a delightful romance. The interaction between the characters is refreshing and engaging, TOP PICK" - Stamford Chronicle

"Readers of romantic historical novels will like enjoy the romantic dialogue and the sexual tension between the two main characters in THE ELUSIVE HIGHLANDER." - Romance with Heat

Coira Ainsley, beautiful,confident account representative for a high end travel company, steps into the office of the man whose business her firm has been seeking, and ends up in 14th century Scotland in The Elusive Highlander by JuEphraime. Sensing that the gorgeous Scottish warrior may in fact be the same man she followed into that Manhattan office, Coira is immediately on guard and demands to return to her time and place. Alasdair Campbell is unable to help, however, because he is the victim of a Druid spell that has caused him to wander the world for centuries, unsure of how to change his own circumstances. Fighting an instant attraction, Coira tries to understand her place in Alasdair's life as he prepares for a major battle against England, trying to bring recognition to his King.When it is obvious that there is nothing to do but go along with fate, Coira succumbs to her desires and marries the Laird with some amazing results!

Popular writer Ju Ephraime has recreated the beauty and intensity of the Scottish Highlands and its people in The Elusive Highlander, and brought a love story spanning centuries to life. Deep emotion and daring intimacy are only part of what Coira and Alasdair share as the lively action recounts some of the historical truth of early Scottish history.With added touches of legend and Highland magic, Coira and Alasdair share passion and complete devotion to one another while starting a new life together. Beautifully written and heart-warming, The Elusive Highlander is a story sure to warm up your emotions. Enjoyable and entertaining!-Melinda Hills for Readers' Favorite

Get your copy here: http://hyperurl.co/HighlanderJU
**Available For A Limited Time at the low price of $0.99!**

Have a taste of it here:
She began pacing the room, looking for a way out. There seemed to be one exit. She was well and truly screwed. Coira removed her coat and, putting it aside, crawled under the bed to see if possibly there would be an escape in case of a fire. There was nothing. She was crawling out, backwards, when she felt something solid in her way. She couldn’t turn around beneath the bed. There wasn’t enough room to do that, so she kept pushing with her butt. By then her short skirt was riding up her hips because she could feel the cold air on her thighs. She wished she could’ve kept her coat on while she went searching beneath the bed. The problem was the coat was too bulky and cumbersome for that. She was gripped by the waist and pulled partway out. Her butt came into contact with the weapon he had hidden beneath his plaid.

“What are ye about, lass?” he thundered.

Coira’s attempt to remove her head from beneath the bed, and separate her body from his person at the same time, caused her to bang her head on the bed frame. She was still able to turn and face him, even if she was now in a sitting position on the floor, looking up at him. His blue eyes appeared to glitter as he swept them over her from head to toe and came back to settle on her short apology for a skirt.

“’Tis bad enough ye go about in a state of undress, and now ye crawl over the floor with yer bum in the air.”

Coira could tell he was affected because his brogue came out, fast and hard. She shivered. He would have to catch her in this compromising position with her butt stuck up in the air, barely covered by the scrap of fabric she called a panty.

“Answer me, lass. What are ye trying to do?”

“Nothing? Ye just crawl over tha floor for amusement?”

“No! I was trying to find a way out of this room if you must know.”

“Ye think there would be a door beneath tha bed? Is that what ye are saying?”

“Yes. I believe you know I arrived here by some sort of magic, and I was trying to find my way back.”

“Nay, I dinna ken,” he said softly. Too softly for someone who was practically yelling at her a couple minutes earlier.

Her breath caught in her throat as, with a small sigh, she stood up to face him. Now they were inches apart from full-frontal contact. Thinking of contact, she glanced down at the front of his plaid, and sure enough, it was tenting big time in front of him. Coira felt electricity lance through her everywhere his gaze landed. If he’d pushed aside his plaid and taken her then, she didn’t think she’d have the willpower to resist him. She had to pull herself back from the edge of disaster. She didn’t belong in his world; she belonged in the twenty-first century.

“I’m sorry if you find my actions offensive. I have to get out of here. I don’t belong, and if it means earning your displeasure, then so be it.”

Don't Miss This Opportunity To Get This Great Romance for the low price of $0.99.

Get It Here: http://hyperurl.co/HighlanderJU
Ju Ephraime writes steamy high heat romances, packed with emotions and strong alpha characters and always a wonderful, happy ever after. She has won several awards for her writing, and had even seconded in Amazon Breakthrough Novel Contest, with her White Magic Woman. When not writing romance novels, Ju could be found writing children’s books, which includes her, Too-Clever series, a collection of ten children stories. Ju writes her children's stories under, Dr. Julia E. Antoine. These days she stays busy helping in the community and donating her services to a not-for-profit organization, which she helped establish. Presently, she resides in CT where she has lived with her family for the past thirty years. She still misses her time on the sunny Caribbean islands, but takes pleasure in using them as backdrops to some of her stories.

Visit her blog at http://www.juephraime.blogspot.com

What others are saying about Ju's books:
"...steamy, provocative and fresh..." ~Midwest Book review
"a new level of heat!" ~Readers’ Favorite
Powered by