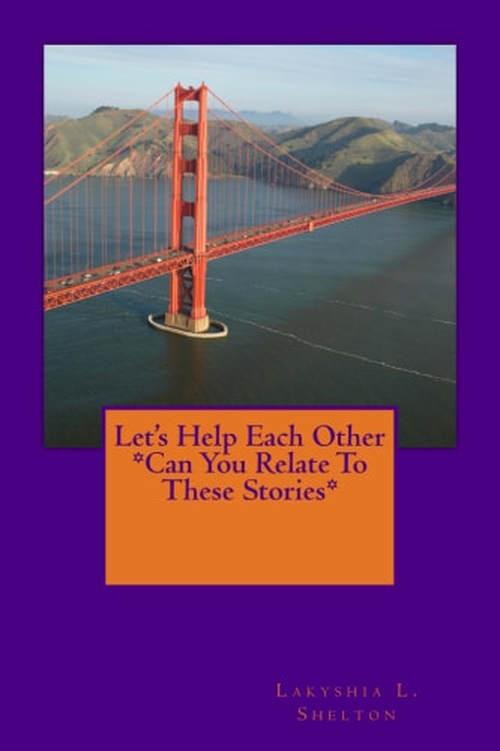 Let’s Help Each Other:
​Can you Relate to These Stories​?

Let’s Help Each Other Can You Relate to These Stories, written for mostly all age groups is about HIV & Aids, Rape, Abuse, Suicide, Depression and other emotions and obstacles someone may have faced or is facing right now.
Keisha ad her family moved to Harlem Florida where she met her first love, but that love was short lived when she was forced to leave him behind and move to another city called Fort Myers Florida.

Keisha was then sent back to Clewiston to live with her father where she ended up reuniting with her first love Ethan. Some years pass by before Keisha and Ethan are blessed with a handsome baby boy. Little did she know that she would soon discover Ethan was dating her cousin and they would have to go to the Maury Povich show for a DNA test.


Anna Marie remembered going to a party and having a great time but why was she sore and in the hospital? Her thought would soon come to a end when the doctor’s advised Anna Marie that she was Pregnant and HIV positive!
Julie Ann was the type of girl that every man wanted, just beautiful all the way around. Julie met this guy who later became her client and a short while later they got into a relationship and he began to beat on her…. Then one day she contacted a very close friend who rescued her out of that situation, and everything was going smooth until she met her soon to be boyfriend who would later give her two children and positive for Aids after introducing her to crack rock.


Katie grew up being bullied and always talked about. People would say things to her like you are ugly, you will never amount to anything in life, and nobody will ever love you, things of that sort. It wasn’t till Katie got older and began going to Mental Health that she realized how much those things affected her life, relationships, love, and trust. Katie was prescribed Cymbalta and Prozac for low self esteem, bi polar disorder and depression.


Keshondra made mistakes in life and ended up going to jail. After about a month of being incarcerated Keshondras brother and boyfriend come to visit her, but during the visit she kept seeing these two young girls like hanging around in the backdrop. Keshondra asks her boyfriend and brother was the girls with them and they said no, but before the visit ended he asked her boyfriend was there anything he wanted to tell her before anyone else did? He responds no! Two weeks later Keshondra is surprised with a visit from her mom explaining that her brother and boyfriend was riding around with this young girl and that her man had been arrested after telling the police that all the drugs was his and the only reason he was selling is because his baby mama just got locked up and they had not too long ago had a child which he was trying to get Christmas presents for. Keshondra lost it and tried to commit suicide which led her to going on suicide watch.


"What is abuse?" Asked the teacher.

"So nobody knows. Well your assignment is, what is abuse? Whether it’s mental, physical, or emotional. Abuse is abuse, no matter what form it’s done in!"

Rose was a dark skinned sista with a banging style about herself. Rose has a sister named Tina. She moved away with her only daughter, when rose finds out that Tina's boyfriend was abusing her.  He would take the food he purchased out of the house and throw it away, try to bust her windows out, and when that didn’t work he would jump on Tina so bad till she would end up in the hospital.

Foxie being the new girl in the neighbor hood began talking to noell and one night noel came over with his cousin Leon. Leon seemed pretty nice until he ended up raping Foxie while noel sat there and watched. Foxie screamed and cried but Leon would not stop and she just couldn’t understand how is noel posed to love her as he say, but just sat there and watched his cousin do whatever he wanted to do to her.

Lakyshia says this book was written to reach out to the young generation coming up. I want everyone to know that I really do understand what you may be going through, even if I didn’t personally experience your particular situation. I have family members and friends that I’ve witnessed in situations as such. I’m not here to judge you, and it’s not about you being a victim. It’s about your story. I want to be the voice to speak for those who can’t or won’t speak for themselves because they are too scared.

I’m here to tell you that I love you and have your back. Speak up and speak out! Please save someone else from going through a similar situation and left to feel alone because so many tend to not believe their story. It doesn’t matter if they won’t listen, tell someone else because you will eventually come across a person like me who’s willing to listen and do something about it!

When you are ready to read more please click the button below!