About The Author Rebecca Lomabrdo

Rebecca Lombardo began writing as a child. In third grade, she told everyone that her dream was to be a writer. At the age of 19, she was diagnosed with Bipolar Disorder.  She continued to write poetry into her 20’s, until her illness consumed so much of her time and energy, that she just lost the will to write.  She never gave up her dream to be a writer. However, the despair she felt over not being able to find the words anymore was just too much for her to take, so she gave up writing for many, many years. Sporadically, she would begin a journal, blog, or even write a poem for her husband, but it was never the same again.

In the summer of 2013, Rebecca faced one of the biggest struggles of her life. After losing both her mom to lung cancer in 2008, and her brother to an accident (on her birthday) in 2011, she felt as if she was drowning. Her physical health continued to deteriorate, and the migraines that were once just a nuisance became a constant.  They would sometimes last 6-7 days at a time, and were cause for countless trips to the emergency room.

Trying to pick up the pieces of her life after her mother’s death, she moved forward with running a small pet boarding business.  She also attempted an online direct sales business. Yet, she fell apart, and there was no way she was going to come back on her own this time. She attempted to take her life and was hospitalized against her will in a horrible place.

She was released the first week in July.  Her PTSD, anxiety, depression, and grief were overwhelming, so she decided to begin writing again. When the words began to flow easier and easier, she decided that she would be willing to turn it into a blog.  She hoped others could see her struggle and know that it’s a vicious cycle, but it can be overcome. She desperately wanted it to help her get past all the trauma of these experiences. As her writing went on, she would receive more and more feedback from total strangers, sometimes in other countries, that would thank her for telling her story. They were grateful that because of her, they were now able to get help.

On August 23, 2015, It’s Not Your Journey was finally released on Amazon.com. Feeling accomplished and proud, Rebecca now hopes to go on and help an even broader audience.
​
She celebrated 14 years of an incredibly happy marriage on August 3, 2015.

Rebecca's Debut: It's Not Your Journey 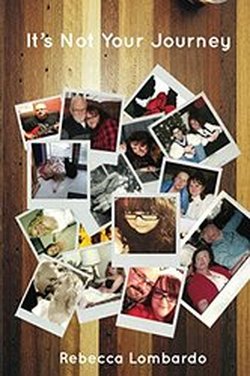 This is my story. Your experiences with depression may be entirely different from mine.
In her first published work, Rebecca Lombardo collects her internationally followed blog into the pages of It’s Not Your Journey, named after her highly popular blog. Rebecca invites use to explore her struggles with bipolar disorder, depression, anxiety, self-injury, and recovery from a suicide attempt.
Rebecca shares her very real, raw feelings on these subjects, as well as addressing other issues that have contributed to her downward spiral and eventual climb out of her own pit of despair.
Issues such as the loss of her mother to lung cancer, the death of her brother, abandonment from friends and family members due to her hospitalization, and more. You learn precisely what she was thinking and why she proceeded through her life as she did.
We continue to stress that this book was never meant to act as a text book or take the place of medical advice given to you by your doctor.  Sensitive subjects are addressed, such as self harm, suicide, and death.  Therefore, there is a trigger warning for anyone that is sensitive to these issues.  If you are a parent, please be sure your child is old enough to process this information.

Rebecca was featured on a podcast in the United Kingdom called Mental Health Matters Follow this link to listen: ​http://www.phoenixfm.com/2015/09/16/mental-health-matters-podcast-6-listen-here/

Check Out Her News Appearance Here

On November 26th, 2014, Rebecca interviewed with Lori Purdy Faitel to explain "The Science Of Happiness" and how you too can combat your darkest moments with your brightest passions. This interview can also be found in the concluding pages of Rebecca's book "It's Not Your Journey".
​
This and Other Information about Rebecca can be found at her website: http://www.rebeccalombardo.com/#!media/c14lh

Hello Rebecca & Thank you for taking the time to sit with us!

​How long have you been a writer and how did you come to writing? How did you come up with your stories?
I started thinking about being a writer when I was a kid. My favorite class in school was creative writing.  In high school, I started to write a lot more, mostly poetry. I continued to dream of writing a book, but I struggled with writer’s block. I started writing about my life, and the pieces just seem to come together.

What are the best and the worst aspects of writing?
I love it when readers contact me and tell me that I have helped them.  It makes all of the struggle worth it.  It helps me as well.  I have been able to overcome a lot of guilt and shame that had built up over many years because I could finally open up about my feelings.
The worst part would have to be the critics.  The bad reviews are like a punch in the gut, especially when you know that they just flat out misunderstood what they were reading.

What inspires you to write?
I don’t know that I could put my finger on one thing that inspires me, aside from the readers.  I may read something online or hear something on the TV, and BAM! There’s an idea.  I often wake up in the middle of the night with an idea, and I grab my cell phone and text it to myself.

How did you conduct your research for – It’s Not Your Journey?
There wasn’t much in the way of research for It’s Not Your Journey because it’s a memoir about my life.  Occasionally I felt like maybe I wasn’t 100% sure that I was accurate about a certain symptom or medication, so I would do some fact checking on Google.  That’s one major benefit of writing a memoir. All the answers you need are right there.

What would your friends say is your best quality?
I think my friends appreciate my strength, but they get a kick out of my crazy sense of humor.

Are reader reviews important to you?
Absolutely. One positive review can bring a smile to my face for days.  Conversely, one negative review and I’m a mess!  I think it’s extremely important to keep up with your reviews and learn from them. Without readers, we wouldn’t be able to do what we love.

Do you have any blogs/websites?
Yes, I sure do. I have an author website and a blog in addition to my social media pages.
Author site: www.rebeccalombardo.com
Blog: www.judgmentfreezone2013.blogspot.com

What do you do when you don’t write?
When I’m not writing, I spend as much time as possible with my husband. We have a very happy marriage. He is my best friend.  We have so much fun together. We spend a lot of time watching movies and our favorite shows.  We have recently started playing board games together, and it’s been a blast.  We have five awesome rescue cats that we love to hang out with as well.

If you could share one thing about yourself that you would like readers to know what would it be?
I think it’s important to mention that several years ago, this book wouldn’t have been possible.  I was hiding my mental illness, terrified of the stigma and what other people would think.  It’s only been in the last two years that I was able to speak up for myself and for other people that didn’t have a voice. I am proud to be able to say that I am an advocate for people dealing with mental illness, and I will never stop fighting to raise awareness.

Well Thank you again, Rebecca. It has been a pleasure getting to know you!

Thank you, Sarah Jane & Margaret, for all of your support and guidance! You are both top notch!!
Powered by