​A Regency Romance.
The war is over for the nation but not for the new Duke of Ormond. With death and debt stalking his every waking moment, caught between blackmailers and his brother’s deepest secret, Alexander’s dreams lie in tatters but he never surrendered on the battlefields of the Peninsular and he’s not about to admit defeat now. Even if that means marrying a woman he has never laid eyes on before.
With her father’s warnings still fresh in her mind and her imperfections obvious to any who know her, Elizabeth’s options for freedom are diminishing with every trembling step. Available suitors are few and far between. Marriage to a debt ridden, aging fortune hunter will not be easy but with no other alternatives and destitution threatening she cannot escape her fate.
Falling in love hadn't been a possibility Alexander ever considered but one glance at his beautiful bride’s tear filled onyx eyes has his blood surging through his veins, his heart pounding in his chest and he can no longer hide his emotions behind a facade of polite indifference.
Elizabeth hadn’t expected him to be handsome. She hadn’t expected him to greet her with a sparkling sapphire gaze. She hadn’t expected gentle fingertips on her skin or her heart to break at the tender words on his lips.
With Ormond and the family jewels at stake, Alexander’s resolve to defeat his enemies is soon put to the test as rumour, intrigue, and scandal threaten his and Elizabeth’s blossoming affections. There is clearly another plan. There had always been another plan. A plan of greed and vengeance devised to ruin Ormond and its descendants for all time.

Silence of Scandal is a light-hearted, easy read suitable for age 16 and upwards. (Contains some swearing and sensual love scenes)

Get Your Copy Here: http://bit.ly/2b5q4qPSilenceofScandal 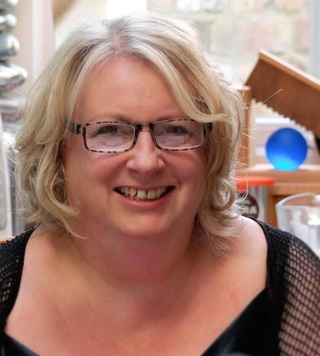 I was born in Essex England during the mid sixties but I missed all the fun. Being only young, I assumed that all Beatles were six legged creatures and Flower Power was something to do with the vigorous way my mother kneaded the bread dough.

My wonderful parents brought me up with a huge love of books. We read anything and everything. Bedtime stories were a treasured time of adventure and mystery. My sister and I sat wide eyed in wonder and to this day I worry about Dinah and Dorinda being pricked with pins because they grew so fat, and I never pull faces at the a waning moon (or was it a waxing one?) just in case my chops stay that way . (The Wind On The Moon)

I began reading romance while still at school. The fuel for many a teenage fantasy leapt from between the covers of wildly romantic books and my passion still lingers now for all those dark haired heroes.

My own beautiful teenage daughter persuaded me to write my first romance. She was only fourteen at the time and between books for children and adults. She couldn't find anything that ticked all her numerous and particular boxes and so she asked me to write a book, with all the exact ingredients just for her. Though not just a book for teens, she enjoyed the resulting tale so much that she shared it with her friends and I eventually published A Perfect Summer as an ebook on amazon.

But I have discovered that writing is not easily stopped once you start. It has turned into a grand passion that I just cannot hold back. The fingertips start tapping the keys and ideas suddenly come flooding, far too many for just one book and so I began another and then another. Twenty-two books later I am still nowhere near done. Book  twenty-three is on its way and only just the other night I woke from a wild and wonderful dream with book sixteen fully formed in my head.

Romance will always be my first love but recently I was so influenced by a tiny polished plaque on a sea wall that I gave paranormal romance a try. (Echo Beach) Mixing the two genres was a real challenge for me but I was delighted with the result. Historical romance is my latest genre. All those fabulously titled and passionate men are impossibly hard to resist!

I hope you enjoy all of my efforts and I look forward to your comments and reviews.

​Each book is a stand alone story, but they are best read in order to fully appreciate all the characters and locations which are current throughout the series.

Enjoy An Excerpt From Silence Of Scandal

Giles sighed wearily. Three days of solid drinking were telling on him. He raised his eyebrow at the landlord and then had to wink several times to get it come back down from his forehead again. He rubbed his eyes and yawned.
“Have a heart. There will be no moving him tonight. Bring him a blanket, will you. That will suffice for now. I’ll take him home in the morning, banshees, serpents, mermaids or not.”
The landlord threw up his hands in despair. The two gentlemen had appeared within an hour of each other three evenings previously and had spent the intervening period attempting to drink his cellars dry. The innkeeper had heard many lurid stories in the intervening days since Alexander’s wedding ball but he had wisely kept his mouth shut and refused to be drawn on the young grooms where-a-bouts.
Giles had remained marginally more sober throughout the affair though not by much. Now he moved to the other, still upright chair by the fire and slumped down in it. He stared down at his sleeping friend and then looked up briefly as the landlord returned with two blankets. The man passed one to Giles.
“I’ll be bringing you both tea from now on. And I want you both gone in the morning.” He threw the other blanket over Alexander’s prostrate form and retreated from the room, gathering the empty brandy bottles as he went.