The Last Airship from Khartoum 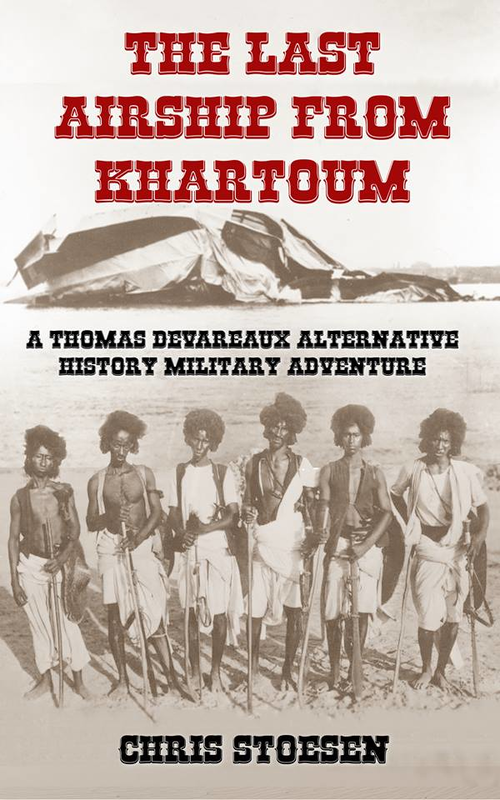 ​Old Enemies are closing in. Richmond sends them away.
Will Devareaux find disaster or glory over the skies of Khartoum?
Devareaux's command is being hunted. He must battle traitors at home before being sent on a goodwill mission to secure favor with their ally Great Britain. Now promoted and in command of a squadron of airships, Devareaux and his men must fight against not only hordes of enemies but the perceptions of his allies as well. Drawn across the sweeping drama of the fall of Khartoum to the forces of the Mahdi, Devareaux must try to convince General Gordon that his position is untenable and help the man escape before they miss the Last Airship out of Khartoum.
​
The Last Airship from Khartoum begins with old enemies attempting to settle a score with Thomas Devareaux and his former crew. From Virginia to South Carolina to Cairo and Sudan, Devareaux and his company fight for their lives. Just when they believe that they have the upper hand, the President of the Confederacy, James L Kemper, sends Devareaux halfway across the globe to support the British in their fight against the Mahdi's siege of Khartoum. He and his men are not only caught in the crossfire of political ambitions, they are enemy targets. Will Devareaux find disaster or glory in the skies above Africa? The Last Airship from Khartoum is a work of alternative history. The action takes place in the air, over sea, and on land as these heroes battle to defend their country. It is the second book in the Thomas Devareaux series by author Chris Stoesen. ​​

This review is from: The Last Airship from Khartoum: A Thomas Devareaux Alternative History Military Adventure (The Thomas Sumter Devareaux Series Book 2) (Kindle Edition)
This is an entertaining read with well formed characterisation and excellent story-telling. This is the first book by this author that I have read and I look forward to reading more. The plot is well executed and I think the phrase of alternative history suits it very well. 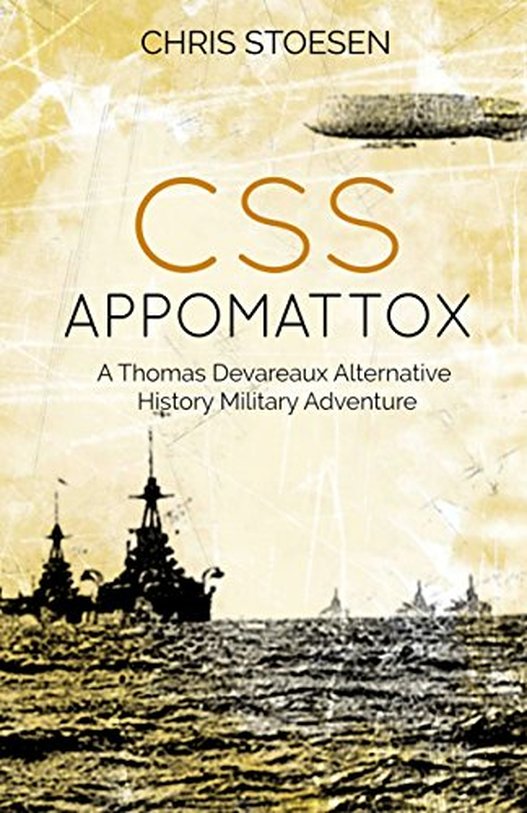 The CSS Appomattox is a work of alternative history fiction, concentrating on the adventures of the naval airship commander Thomas Devareaux and his crew. The action takes place in the air, over sea, and land as our heroes battle in defense of their country.

Background of the Novel
In October 1862, the Confederacy is recognized by both France and Great Britain. Lincoln opens peace negotiations that effectively ended the American Civil War. Decades later, the young Confederacy forges an alliance with Spain – a fading empire desperately clinging to its remaining Caribbean colonies.

The Confederate Military assigns the young crew of the airship CSS Appomattox to assist their country’s new ally. The Appomattox is dispatched with a token Naval force to defend Puerto Rico. Here they will stand against the coming threat of an expansionist German Empire and its ally, the United States.

The crew of the Appomattox not only has to fight against the German military, but forces from within their own navy as well. During their exploits, Devareaux and his crew are recruited by the Signals Bureau (the Confederate Secret Service) to battle their enemies overtly as well as covertly. They encounter enemy agents who seek to do in the young nation through their efforts with espionage.

The action takes place in the skies above the Caribbean and on land as Devareaux leads his landing party of marines to support the guerrillas fighting in the hills of occupied eastern Puerto Rico.

This is the first book in the Thomas Devareaux series. This Alternate History novel employs elements of Steampunk without taking historical technology developments too far outside of their historical progression.

​Get you copy here

Pity there is no 4.5 stars button.
I liked the story much better than the prequel.
I look forward to the next in the series.
Other than the 'steampunk' portion, I think this series has as much potential as the "Stonewall Goes West" or "Shattered Nation" collection.
Good job Mr. Stoesen.

Oh, and in case it wasn't mentioned elsewhere, "Ms." thru me for a loop. I thought for sure that is was a only a twentieth century affliction till I did a bit of reading.
***
4.0 out of 5 stars A great book for escapists and adventure readers.
By doug on December 29, 2015

USS Appomattox is the first steam punk book i have been able to read all the way through. I enjoyed it thoroughly. Loving history and the what ifs, this book was a fun read that made me question the technology and plausibility. Technology was within period. Plausibility is right on. I would liken this to the Harry Harrison "Star Spangled Banner" trilogy for a plausible plot. The characters were thin, but i like them that way. I can paint them with my own brush as I read. The only reason i gave this less than five stars is the need for better line editing. I had no problem with the story line or the bad grammar, most of which was in conversation and period. I can hardly wait for the second book in the series. I was given a free copy of this book to write a review through Reading Deals. I will pay for the next one, gladly. Write on Chris Stoesen.
***
4.0 out of 5 stars Good alternate history and adventure novel
By Charles van Buren on December 25, 2015

A very interesting premise and plot with some spelling, sentence structure and grammar errors. Mr. Stoesen tends to write in a very direct style with short sentences which make the book easy to read and understand even if it is not great literature. He has obviously done his historical research without which alternate history is not believable. I plan to next read the prequel, SHARPSBURG SUNRISE.
***
3.0 out of 5 stars Not Bad
By James D Cobb on October 18, 2015

Nice story line but too many cliches. The man hero ls slightly flawed and that's good but the structure is disjointed.
***
5.0 out of 5 stars CSS Appomattox: A Thomas Devareaux Alternative
By James F. Walroth on October 15, 2015

As an alternative history fan, I really enjoyed this story. It was clever and the author used a lot of imagination to derive a very plausible plot making use of the technology of that era. He deserves an "A" for thinking outside the box.

Despite the use of some 20th century words that would not have been used even in a steampunk world, the book was a fun read. I would buy and read a sequel to it but I would suggest that the author get someone to edit the work. For instance, despite what they do in the comics, "all right" is two words, not one. There were a few other little glitchy things like this but I didn't lose my suspension of disbelief. I hope the author will contact me.
***
4.0 out of 5 stars Some quibles about CSS Appomatox background
By Ray Givan on May 6, 2015

On the whole a good read although marred by syntax, grammatical and spelling errors--whihc a good editor or proofreader would have caught. Some of the background was disturbing. I think it plausible that Lincoln would have negotiated with Great Britain and France for an agreement to boycott goods nations allowing slavery from January 1865. This would have hit the newly independent Confederacy hard, but not hard enough to free the slaves in 1865. I think the first move of the Confederates would have been legislation, and a Constitutional amendment, possibly as early as 1867, removing laws against emancipation, followed by setting up a fund to finance slaves wishing to buy their freedom, and finally in 1870 or so abolition of slavery. Confederate buffalo soldiers? Why not?

The other issue that bothered me was the statement that the Confederacy would have no access to the Pacific. A Confederate purchase of Sonora and possibly Sinaloa would have givven the South two significant ports: Guaymas and Topolobampo on the Gulf of California..
***
5.0 out of 5 stars A Great Start
By Larry Thompson on April 29, 2015

Stoesen has set up a steampunk/alternate history world where the Civil War in America ended in an Armistice with the help of Great Britain and France. Twenty years or so later, the German Empire, in conjunction with the United States, is actively and aggressively seeking to acquire property in the Caribbean and elsewhere. Spain is the patsy and the CSA is the Spaniards' ally. Steam powered dirigibles armed with guns and rockets are the new technology which is continually evolving. This is the first in a series of books featuring a young Confederate officer named Thomas Devareaux; clearly from the title of the first book, we'll be following his adventuress. Stoesen has a light and easy to read style. Don't look for deep meanings and great profundity here; but, what is present is readable, interesting and fun. I look forward to the continued adventure Devareaux and his companions. It will be interesting to see how it all sorts out between the German Empire, the Spanish Empire, the United States of America, the Confederate States of America, the Apaches and Commanches threatening the Confederate states of Arizona and New Mexico (heavily populated and defended by African-Confederate soldiers and officers) and the US states of Colorado and Nevada not to mention the Philippines, the Sandwich Islands (aka Hawaiian Islands), etc. What will the United Kingdom and France do? Only Stoesen knows.