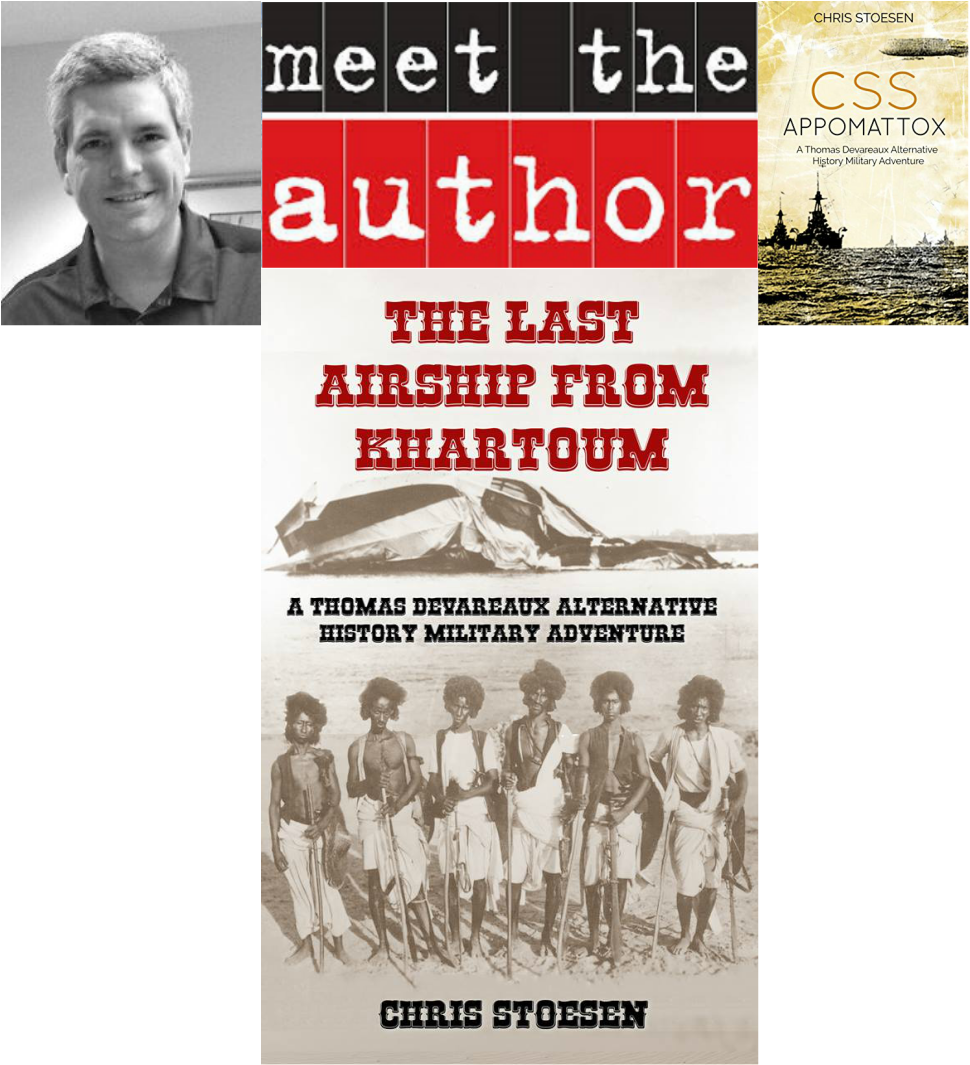 Chris is an amateur author with interests in both historical and fictional subjects. He was born in 1970 and raised by fantastic parents in Tampa, Florida. So all of his shortcomings are of his own making and not their fault. His single greatest achievement is being married to the same wonderful woman for over 23 years. He and his family, live in the Atlanta area.

Chris is relatively new to publishing on Amazon but so far has found it to be a pleasant experience. Most of his writing thus far has been related to Historical War Game Scenarios such as In the Name of Roma which is available on Amazon as well. You can find his other work on the web store of the TooFatLardies. This includes titles such as "This Land Divided," "With Fire and Sword," 'Rock the Casbah," "The Campaign For Greece" and "Call This a Ruddy Picnic?" His most recent book is "From Empire to Revolution" that covers the Austro-Hungarian and Russian Empires during World War One.

The first fictional book in the Thomas Devareaux series is now complete and work has started on the second book of the series. He has also written The Home, a zombie themed short story.

He has some short stories and some potential stories that he is working on at the Amazon WriteOn site: http://goo.gl/Kq44ZU Please stop by and let him know what you think.


To get an email whenever the author releases a new title, sign up for the VIP newsletter at: http://chrisstoesenfiction.blogspot.com/p/mailing-list.html

Coming Soon! An interview with Chris on The Last Airship From Khartoum!

﻿
Chris is an author with interests in both historical and fictional subjects. He was born in 1970 and raised by fantastic parents in Tampa, Florida. So all of his shortcomings are of his own making and not their fault. His single greatest achievement is being married to the same wonderful woman for over 23 years. He and his family, live in the Atlanta area.

Welcome Chris, and thank you for taking the time to chat with us today.

Let's talk a little about your writing. How long have you been a writer and how did you come to writing?
I have been writing since the late 1990s. Most of that was more of a historical nature about lesser known campaigns of the Second World War and the American Revolution. This varied between the German Invasion of Greece, the Italian East African Campaign and the American Revolutionary War battles in the backwoods of Georgia. I was mainly writing things that I was interested in for my war gaming hobby. I only recently started to write fiction as a challenge thrown at my by a college roommate who was writing fiction before me.

How did you come up with your stories?
I love to read. History, science fiction and, fantasy are always favorites. I think about a story I would like to read. Sometimes ideas are in response to another author whose character did something that I think, “Well I would not have done that.” I was a big fan of Alternate History books like Harry Turtledove. But most alternative history writers paint with a bigger brush. Their characters include leaders of nations and armies. I was interested in what was happening to the poor guy at the sharp end of the policy maker’s bright ideas. You still need the backdrop of the larger picture but concentrate on the smaller guy’s troubles. That is what gave birth to the Thomas Devareaux series.

What are the best and the worst aspects of writing?
The best part is having a creative outlet. Exercising my imagination is definitely a great release. The problem occurs when it takes me down rabbit holes that don’t really matter or are another story altogether. While writing the sequel to CSS Appomattox, I ended up writing The Home. Then
suddenly I switched gears and finished the prequel to it before the sequel.
The worst aspect has to be editing. It is just something I hate to do.

What inspires you to write?
History, I love reading about history. One of the things I like the most is reading about personal stories, especially with military history. Accounts of what people in high pressure, stressful situations do and how some rise up as leaders are inspiring. Then I imagine about what else could have been done in that situation. That inspires me to try to write.

How did you conduct your research for CSS Appomattox?
It started by a game that I had purchased based on the US War Plan Black that theorized of a German Invasion of Puerto Rico just before World War One. The game was interesting but that there was actually a plan to counter such a move intrigued me. Furthermore, there was a presence of a German War Plan – Operations Plan III that was made to do just that. So I looked into what those war plans entailed.
Then I thought about a favorite topic among Alternative History writers – what if the South won the Civil War. Instead of following the war and how it was won, I jumped to the 1880s and based the book on the aftermath of such a victory.
Next, I was looking at what was going on in the world at that time. Germany had just become a world power after uniting its various principalities into a single nation. Germany was aggressive and had colonial ambitions. With North America divided, the Monroe Doctrine was more or less void. This created the background needed for the book. After that, it was just a case of finding my hero.
I did additional research into the businesses that did exist at the time. The 1870s and 1880s were a time of growth for the United States. JC Penny, Sears and Montgomery Wards were rising stars in the business world. I attempted to draw upon some of that for inspiration as well.

What are 3 of your favorite lines/quotes from your book?
"The puddle was his own drool, fortunately, and not some other questionable liquid."

"In 1872, the Russian Alaska Partnership for Exploration was formed. ... Yet here, was the proof that RAPE was actually doing something profitable." "What are you? Some kind of goggle-wearing Sir Isaac Newton and a Richard Zarvona in one? Well, not the dress part, but a super spy, none-the-less."

"Gentlemen, I have the good fortune of informing you that you have each been given a forty-eight hour pass for liberty in Savannah. Please use the time wisely as I believe I have already worn out the good graces of the military police."

What would your friends say is your best quality?
Probably my loyalty and sense of humor.

Are reader reviews important to you?
They are extremely important. CSS Appomattox was my first novel. Reader feedback was incredibly important as it let me know what I was doing right as well as what I was doing wrong. I thought I could edit by myself. I was wrong. It was a costly mistake that got me bad reviews but those reviews urged me to fix the problems. The other books I have written since have not taken the hit because of the lessons learned from the first book.

Do you have any blogs/websites?
Yes I do. My writing blog is http://chrisstoesenfiction.blogspot.com
If you join my mailing list on the website, I will send you a free copy of the prequel to CSS Appomattox – Sharpsburg Sunrise.

What do you do when you are not writing?
I like to read and spend time with my family.

Tell us about your other books?

Shapsburg Sunrise – This is the prequel to CSS Appomattox. It is the story of Thomas Devareaux’s father and his participation in the battle of Antietam that became the turning point in my timeline for the series.


The Last Airship from Khartoum – This is the sequel to CSS Appomattox. It begins with some unfinished business from the first book. Thomas Devareaux’s crew is being hunted. The Confederacy

Chris, thank you for your time and honest answers, our readers enjoy and respect that.
​

Get connected!
Chris loves to connect and interact with his readers and fans, so here are his links, pop by and say 'Hello' and be sure to tell him you were sent by Rukia Publishing.
Twitter: @ChrisStoesen
Facebook: https://www.facebook.com/CSFiction/
Blog: chrisstoesenfiction.blogspot.com
Google +: https://plus.google.com/u/0/103023746985592538617
Pinterest: https://www.pinterest.com/cstoesen/writing/
Tumblr: ​http://chrisstoesen.tumblr.com/
TheBingBing.com: http://www.thebingbing.com/cstoesen
Powered by